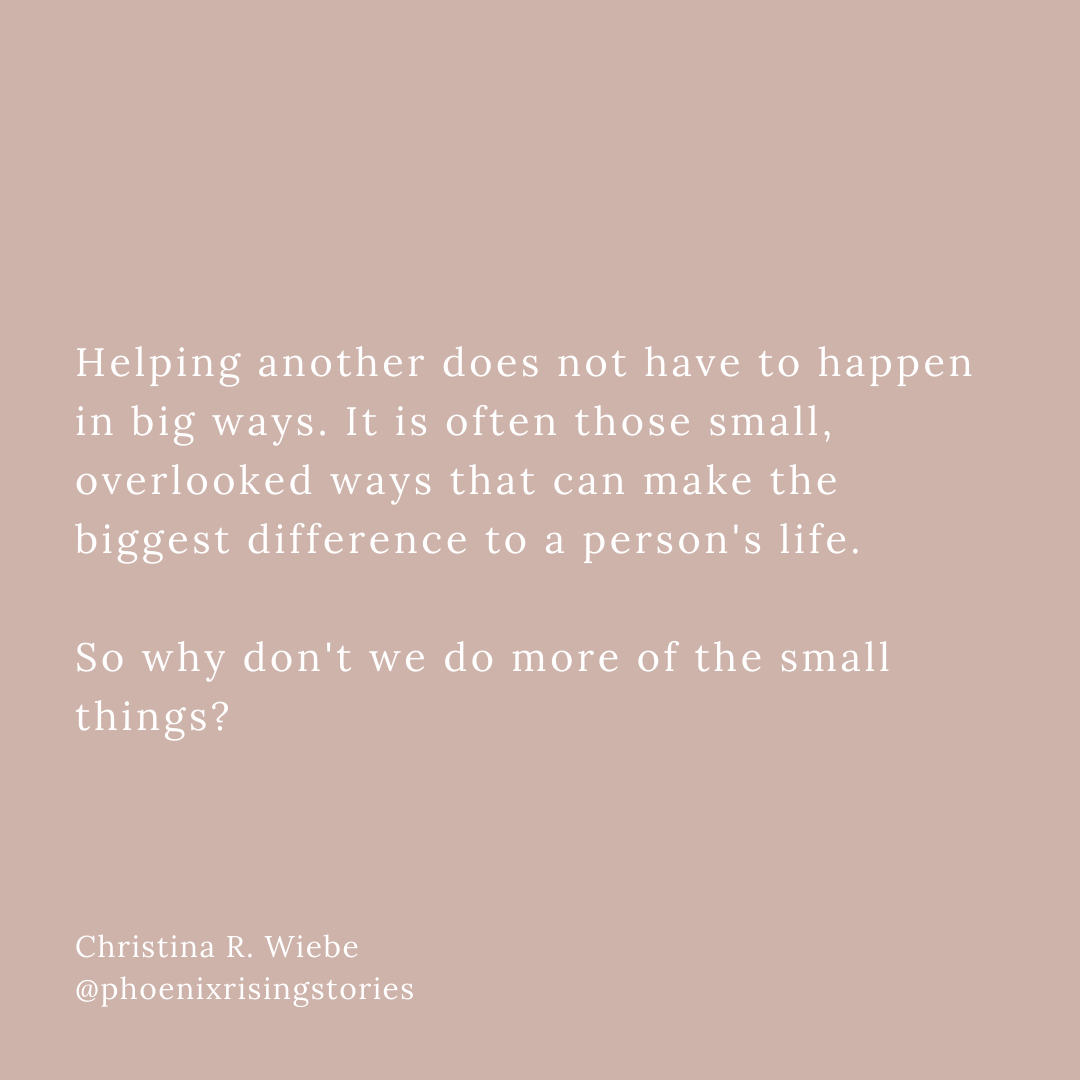 “You’re the first person to ask me about any of this” she said, voice cracking, tears falling.

My heart broke. Tears welled up behind my eyes as I watched her face crumple.

This was not okay.

“How is that possible?!?” I exclaimed, both to her and to myself, the wheels already turning in my mind. Maybe I wasn’t as surprised as I had sounded, but what a tragic realization, to once again bear witness to how we, as broken, imperfect beings, are failing one another.⁣

Why is it so hard for us to ask questions? Why are we so afraid of “opening a can of worms”? Why do we not care enough to delve into someone else’s suffering and sit with them in it for a moment?

I don’t do as much as I wish I could do. I fail the people around me all the time by putting my own comfort before their own, choosing not to ask the tough questions because I’m afraid of what it could unleash, or afraid of the reactions I’ll get, or afraid of the consequences of “going there”, especially when it’s people very close to me and the stakes are high.

But at least here, in this regard, I had done one thing right for someone else. I saw a person really struggling with an eating disorder, suffering because she couldn’t eat, wouldn’t eat, hadn’t eaten for days. And I acted on the first thing I could think of doing to help from a different country, with limited resources, an illness of my own to deal with: I asked if it would help if we did a video call and ate a meal together.

During our call, I observed. I had my food in front of me, but didn’t see any in front of her. I asked where her food was and she brought it over. We talked, our first time ever talking face to face, voice to voice; it had only ever been written messages here and there before.

Eventually I started asking some questions because I wanted to understand what was happening for her. By this time I had finished a full plate of food, she had eaten much less. But she did eat something and for that I was so grateful and proud of her for pushing past the resistance and trying so hard to nourish her body.

I asked what happened when she faced the prospect of eating, what happened when I told her to take a bite, what happened when she was actually eating. I could see and feel the struggle as she demonstrated eating in front of me. I offered suggestions for food to try eating, coming from the perspective of someone who has a very restricted diet like hers and who has experienced what it is like to have zero desire to eat at all and yet have to find a way to force feed myself so that I wouldn’t waste away.

I know the hardship and the torture of struggling to eat with no appetite and with everything turning you off and triggering nausea. But I don’t know what it’s like to live through the torment of a full blown eating disorder.

Someone should have been asking her these questions a long time ago. She shouldn’t have been allowed to slip through the cracks like this. If I, a stranger from another country, could pick up on the severity of this situation, why hadn’t the people around her?

What are the lessons for me here?⁣

Well, to start, pay attention. We need to look beyond ourselves and hone in on what’s going on for the people around us.

Ask questions, even when they bring up all those uncomfortable feelings. I could’ve never known the immense impact my simple choice to ask questions would have had on this person, but it did, she told me so. Imagine if we started asking more deep questions to the people around us. Because life at some point will be ugly and messy and complicated, so why wouldn’t the questions be? Why would we pretend life is anything but?⁣

Even as a spoonie whose life is consumed with illness and the feelings that I am a burden and useless to everyone in this health state, I can still make a difference. Thank you to her for this invaluable reminder. I can still help. Help doesn’t have to happen in big ways. It’s often those small, overlooked ways that can make the biggest difference to a person’s life.

So why don’t we do more of the small things?

What is one small way you can offer help to someone?