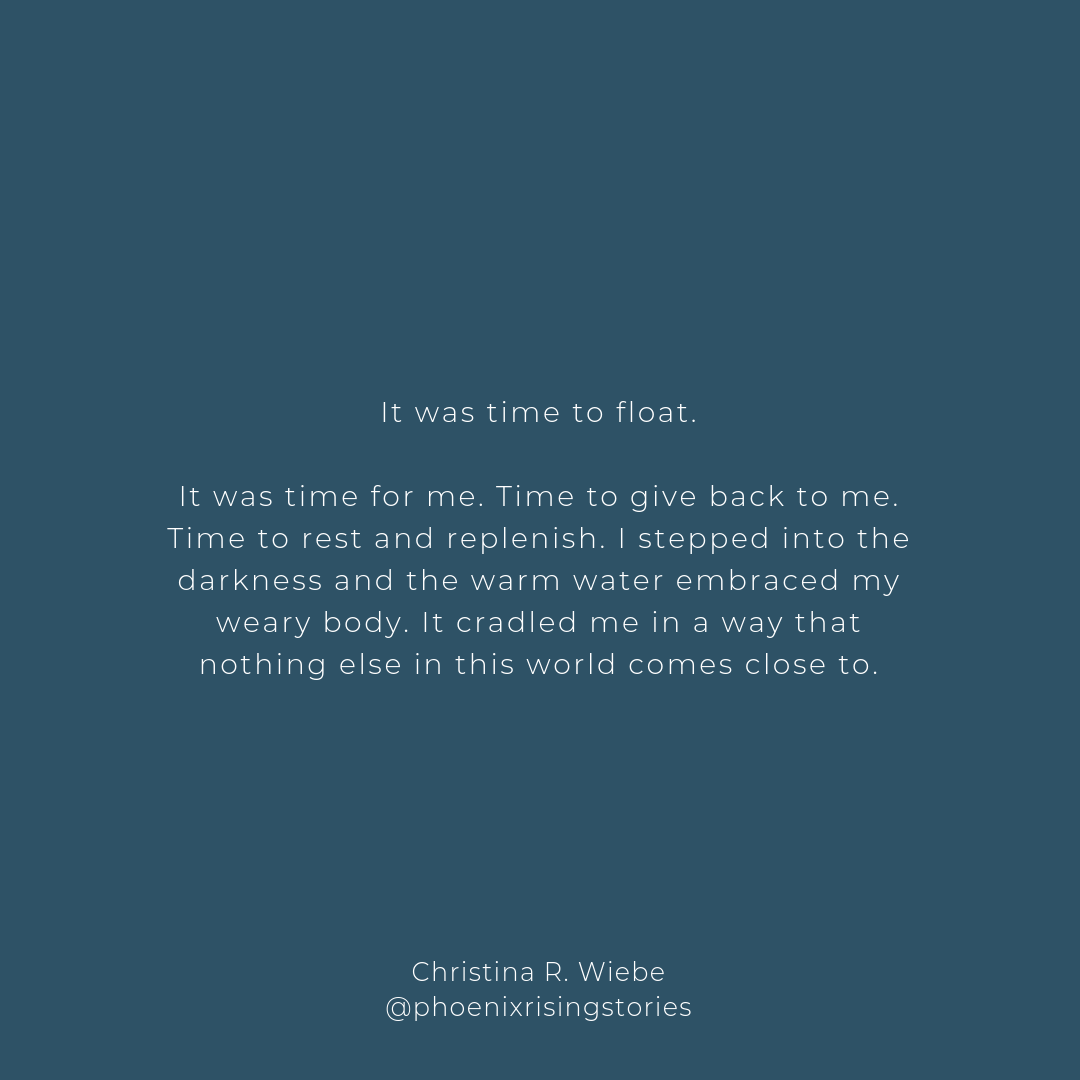 Two hours of bliss. And then a rare night of deep, peaceful sleep. ⁣ ⁣

My last float felt forever ago. The unfortunate aspect of being a woman and floating is the break you are forced into during your period. While it is still possible to float on your period, it is something I prefer not to do. For me, having that additional variable come into play detracts from being able to fully relax into the float. ⁣ ⁣

It was a long, intense, energy draining thirty-six hours leading up to that float. She had come over to escape from the tension and trauma-triggering environment in her home. She needed to be able to breathe again and I knew I could provide a safe space, free from threat for her. ⁣ ⁣

She arrived, I could sense the coiled up, frantic, turmoil coursing through her, and then the floodgates opened. I held space for her, just as she has held space for me. She unleashed. I breathed deep, trying to preserve my already nearly extinguished energy, testing to see if I could be fully present in another's pain without assimilating it into myself like I have always done without realizing what was happening. ⁣ ⁣

For hours and hours she spoke her truths and honoured me with her vulnerability, pain, and stories. I observed, sensed, tuned in. And then it was my turn to speak. My turn to share my observations, channeling wisdom that didn't come from me but came through me, from a source of greater knowing. What an experience. It made me feel a reconnection to a lost part of me that I had disengaged from for a very long time. ⁣ ⁣

When it was over, I was beyond spent. Energy fully depleted, and then some. A droning in my head and ears, on the brink of vertigo, riding waves of nausea, internal tremors on the rise. ⁣ ⁣

It was time for me. Time to give back to me. Time to rest and replenish. I stepped into the darkness and the warm water embraced my weary body. It cradled me in a way that nothing else in this world comes close to. With no sights or sounds to overload my nervous system, my muscles finally began to melt. My neck sunk into the water, trusting it would hold me so that I would no longer have to expend energy to hold myself. ⁣

⁣ My physical body utterly motionless, I, the internal I, began to rock. It felt as if I were being tilted fully backwards, head first, feeling seconds away from fully submerging my head into the salt water and continuing to rotate back and down and around in ways that would defy physics. And yet my body lay still in the water. ⁣ ⁣

That is the last I remember. Two restorative hours slipped by as I remained blissfully unaware. When called back to consciousness, I revelled in the hot water rushing down from the shower head, pelting my skin like an intoxicating massage while it washed the salt away. ⁣ ⁣

I sunk into the mattress. Really sunk. A stark contrast from the discomfort I usually feel, always highly aware that I'm lying rigid on a perceived uncomfortable surface. But not tonight. The float gifted me with the ability to melt into the bed, to feel pleasure in how comforting and cozy it was, and I slept. I truly slept for the first time in a long time. ⁣